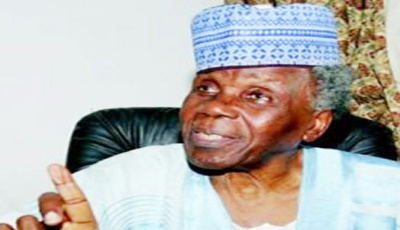 The Nigeria Union of Journalists (NUJ), Kwara State Council has described the death of the father of the state governor and first lawyer in the Northern Nigeria, Alhaji AbdulGaniyu Folorunsho Abdul-Razaq SAN (OFR) as a huge loss and end of an era.

The Union in a statement jointly signed by the Chairman and Secretary, Umar Abdulwahab and Omotayo Ayanda said the state and country at large has lost a gem whose vacuum will be difficult to fill.

The elder statesman according to the union lived a fulfilled life and would be remembered not only for his roles in building a new Kwara but for his contributions towards the attainment of Nigeria’s independence struggle.

“The late AGF who was the Chairman of the Nigerian Body of Benchers was a quintessential legal role model and a strong voice in the old Northern region”, the statement said.

The NUJ urged the state governor, AbdulRahman AbdulRazaq and other members of the family “to take solace in fact that our late father lived to see to the enthronement of a new Kwara which has brought hope to the people of the state and left a worthy legacies behind”.

The Union also commiserated with the Emir of Ilorin, Alhaji Ibrahim Sulu Gambari and the people of Ilorin Emirate over the death of the Mutawali of Ilorin and Tafida of Zazzau(Zaria).

The union prayed Allah to forgive his shortcomings and grant the deceased aljanat firdous and the family the fortitude to bear the loss.

KWARA NUJ FINANCIAL REPORT FOR THE MONTH OF NOVEMBER 2020 0