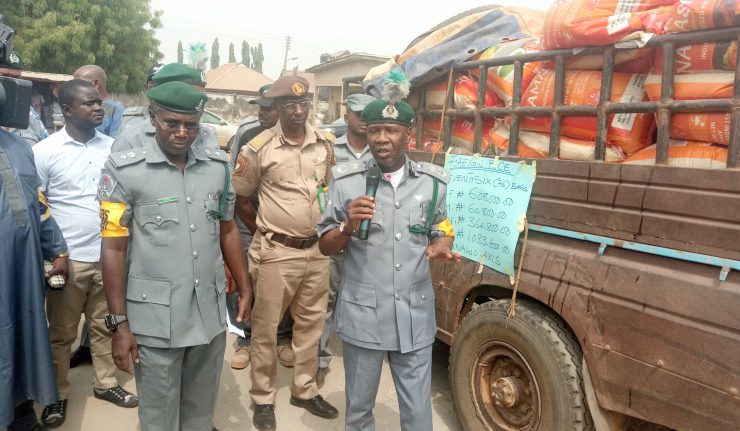 He also explained why his team had to intercept some unbanned items including 20 bags of dried yams flour during its ongoing joint border drill operations along border communities.​

Addressing a press conference at the headquarters of the joint border drill operations in Ilorin, Garba said the benefits of the closure of the nation’ s land border were enormous that Nigerians cannot afford to let go.

“Second hand clothing is prohibited for health reasons. You never know those who have used those second hand clothes, you just go and use it and get disease”, he said while showing journalists units of used clothes intercepted from being imported into the country.

While conducting journalists round​ the seizures made by the border drill operations team, the coordinator said 20 bags of dried yams flour of 100kg each, were also intercepted and sized because they were used to conceal foreign rice into the country.

The customs boss warned that smuggling is a serious crime which will attract a five year jail term for anyone found culpable in the acts.

He listed items intercepted and seized to include 57 units of vehicles of various types, 1,355 bags of foreign rice, 3 long single barrel guns, ƙnives and three cutlasses at Lokoja axis which he said have been handed over to B’ Division Police Station, Lokoja Kogi state

Other items listed according to him included two long single barrel guns and eight live cartridges and one locally made pistol at Kotangora axis of Niger state which he said​ were seized and handed over to A Division Police Station, Kotangora.