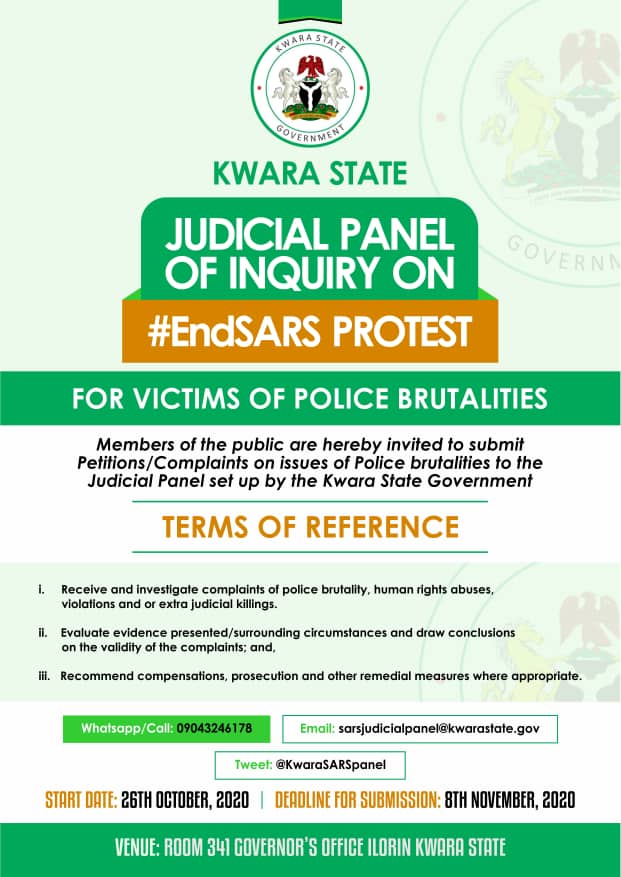 The Kwara State Judicial Panel on Human Rights Abuses by the Police has called on the general public with any allegation of assault, human rights abuses and extra judicial killings by members of the Nigeria Police Force, especially the disbanded Special Anti-Robbery Squad (SARS) to submit their petitions and complaints to the panel.

According to a statement made available to Journalists in Ilorin, the Chairman of the panel, Hon. Justice I.B Garba (RTD), said that though the panel is open to the public but all submission should comply with specific terms of reference, which include receive and investigate complaints of police brutality, human rights abuses, violations and or extra judicial killings.

Justice Garba said that the panel will evaluate evidence presented/surrounding circumstances and draw conclusions on the validity of the complaints and recommend compensations, prosecution and other remedial measures where appropriate.

He urged affected persons to forward 12 copies of their petitions/complaints in writing to the Chairman, Kwara State Judicial Panel of Inquiry on #EndSARS Protest, located at Room 341, Governor’s Office, Ilorin, Kwara State between October 26 to November 8 2020.

“Petitions can also be submitted through any of the following Channels: e-mail: SARSjudicialpanel@kwarastate.gov.ng; WhatsApp: 09043246178 and Twitter:@KwaraSARSPanel.