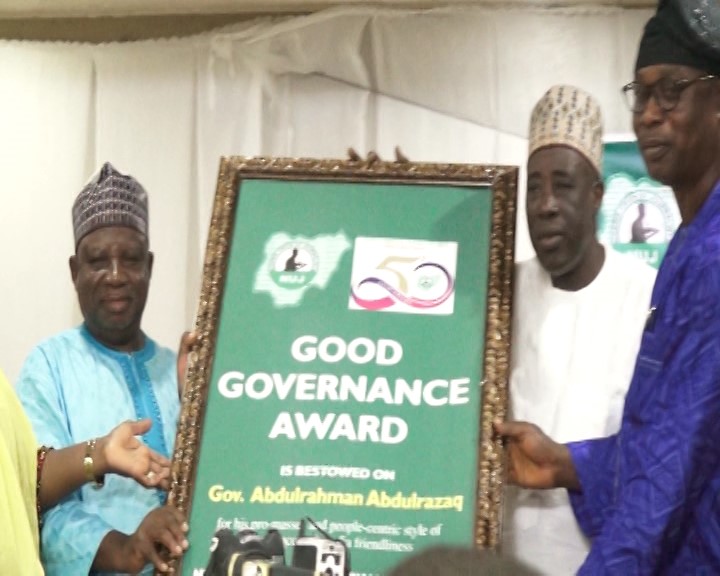 The Governor of Kwara State, Mall. Abdulrahman Abdulrazaq has been honoured with the award of Good Governance by Kwara State Council of the Nigeria Union of Journalists (NUJ) for his sterling performance and infrastructural development across all sectors of the state.

According to the Union, the award was in recognition of Gov. Abdulrazaq’s innovative leadership style which has translated into the successes recorded in job creation, youth and women employment, healthcare, gender balance, Agriculture, media and education sectors, infrastructural development, among others.

The award was conferred on his Excellency at the Golden Jubilee Dinner, Award Night and Launching of the Kwara NUJ Compendium, held at the Banquet Hall, Kwara Hotels, Ilorin, on July 8.

Speaking at the event, the former Chairman of the Council, Mall Umar Abdulwahab, disclosed that the award was conferred on Gov. Abdulrazaq for providing the enabling peaceful environment, modesty and good policies into governance.

Abdulwahab noted that the Kwara NUJ is very happy with governor’s developmental strides in the state and pledged to continue to support the governor in actualising his vision of transforming the state and improving the living standards of the people.

“For Governor Abdulrazaq, we honour him today because of the massive transformation he brought to all sectors in the State and we are giving him good governance award,” Abdulwahab said.

Receiving the award, Governor Abdulrazaq expressed his profound gratitude to the Union for honouring him with the award and retirated government support to all in the union.

The Governor, who was represented at the occasion by his Special Adviser on Strategy, Alh. S.A. Salaudeen appreciated Nigerian Journalists for leading the vanguard in the fight for independent and democracy in the country.

According to Gov. Abdulrazaq, Journalists in Kwara State have consistently championing democratic ideals, giving voice to the voiceless, leading the campaign for good governance, it is upon this that made his administration gave priority attention to issues affecting the overall welfare of practicing Journalists in the state

“Our administration is proud of our partnership with your union which is built on the concept of liberty and freedom, the right for good governance in democracy. It is for these reasons that the government remains irrevocable committed to making all state owned media the best in the country.

“Governer Abdulrazaq has been evidently acknowledged by all at home and nationwide, he has being a roll model in leadership in terms of good governance, dividend of democracy, youth and women employment and gender balance.

“Your award to governor Abdulrazaq tonight, therefore bears eloquent testimony to the consensus of all stakeholders on Kwara project at home and nationwide that the governor has lived up to expections of all who champion the long journey of Kwara State to expand our limited prosperity and abundance”, the Governor said.