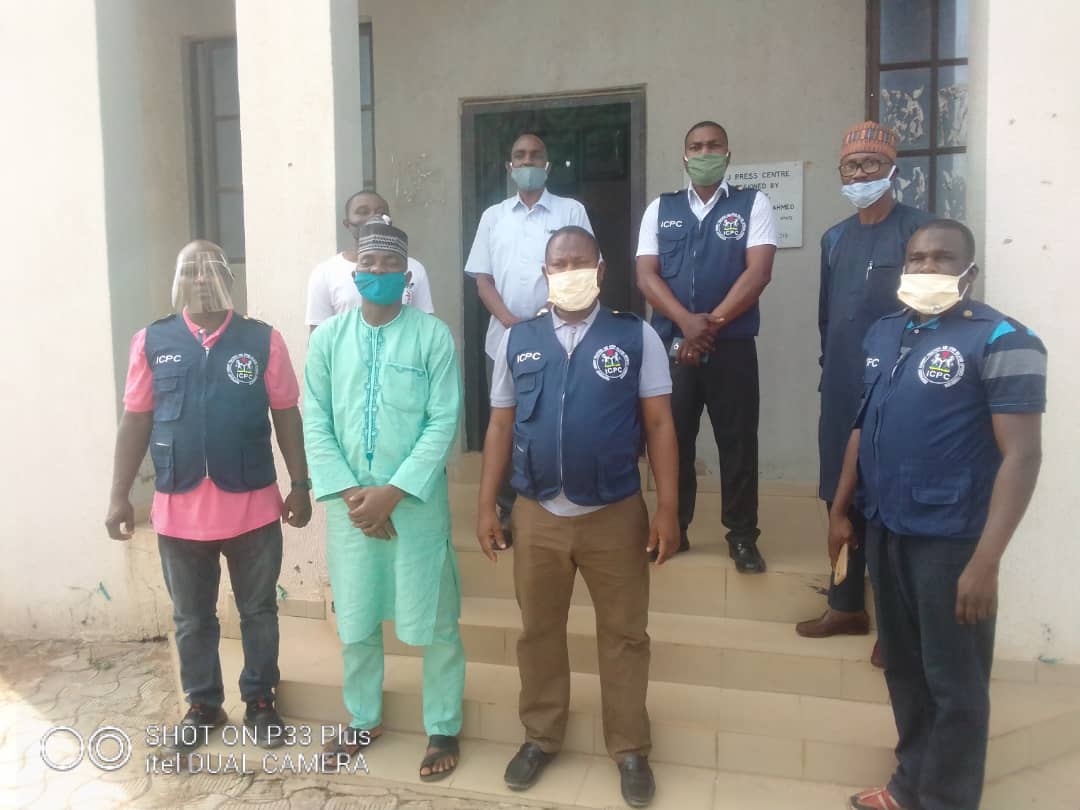 Operatives of the Independent Corrupt Practices and Other Related Offences Commission (ICPC), Abuja Friday began the tracking of 250 constituency projects in Kwara State in the ongoing second phase of the constituency and executive projects tracking exercise in 16 states of the Federation.

The team, which had Thursday visited the Kwara State Secretariat of the Nigeria Union of Journalists (NUJ), Ilorin to seek the support of the media in carrying out the exercise, said they are tracking projects executed between 2015 and 2019 at the total contracts sum of valued at N4.1 billion spread across the three Senatorial Districts of the state.

Some of the projects inspected during the team’s first outing on Friday included  solar street lights along Edun, Isale Aluko, Pakata – Adeta road, Oloje – Alfayaya road, Popo-Giwa and Oloje Estate, among others all sited within Kwara Central Senatorial District.

Also visited in the same district were constituency public primary school projects in Oko-Erin, Ijoro, Adewole and Anifowose, among others.

According to a statement by the commission’s spokesperson, Rasheedat Okoduwa, a copy of which was made available to Journalists in Ilorin, “the exercise, which is scheduled to commence Tuesday 23rd June, 2020 in 16 states, namely: Cross River, Taraba, Ekiti, Ogun, Gombe, Nasarawa, Kebbi, Kwara, Jigawa, Abia, Delta, Ebonyi, Niger, Rivers, Oyo, and Kaduna, will focus on the following sectors: Health, Education, Water Resources, Agriculture, and Power’’.

The commission noted that the objectives of the tracking exercise is “to investigate fraudulent procurement practices in the award of contracts for constituency and executive projects; make recoveries on projects or contracts confirmed to have been inflated or in which contractors under-performed or did not perform at all; and track contracting companies for all statutory compliance”.

It stated further that the Commission had in 2019 launched the pilot phase of the exercise in which it tracked projects performance from 2015 to 2019 in 12 states. “Successes of the exercise included the recoveries of tractors, ambulances, dialysis machines and other hospital equipment from sponsors of the projects across the pilot states”.

The commission added that the successes also included ‘‘the recovery of huge sums of money, hundreds of tricycles, grinding machines and other empowerment items from the project sponsors.

“Furthermore, the exercise forced contractors who hitherto had abandoned projects to return to site to complete them.

“ICPC is again set to take the exercise to states not covered in the pilot phase with the aim of ensuring that government gets value in the execution of public projects, and improved delivery of social welfare services to the citizens”, the commission added.

The commission said, the project tracking will be done in collaboration with the Nigerian Institute of Quantity Surveyors (NIQS), Civil Society Organisations (CSOs), Media, Office of the Accountant-General of the Federation, Bureau of Public Procurement (BPP) and other stakeholders.

Responding, the State Chairman of NUJ, Mall. Umar Abdulwahab assured the team of the cooperation of the Union while their assignment lasted in Kwara State.

Mall. Abdulwahab said the media will continue to play its constitutional role by adequately informing the citizenry in order to strengthen the democracy in this country.

KWARA NUJ FINANCIAL REPORT FOR THE MONTH OF JULY 2020 0