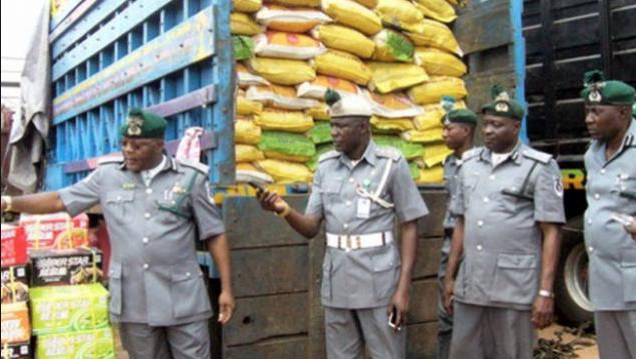 The Joint Border Operations Drill (JBOD), Sector 3 said that it has seized rice worth 22 loads of trailers since August 2019 when it began operation till date.

The operations also said that it has arrested 45 persons for various anti-smuggling related offences within the said period.

According to a press release signed by Public Relations Officer, Kwara Command, Chado Zakari, JOBD Sector 3 has intensified anti-smuggling Operations in the zone few days into the lockdown order amidst COVID-19 pandemic with a view to curtail activities of economic saboteurs.

This he said was in compliance with the order of President Muhammad Buhari on the total blockage of the land borders.

However, the Joint Border Operations (JBOD) Sector 3 covering North Central States of Niger, Kwara, Kogi and Benue States under leadership of Compt. Mohammed Uba Garba has continued to make the Zone unfavorable for the Smugglers which had led to 44 Seizures from March, 2020 till date.

In line with the Customs and excise Management Act (CEMA) Section 147 which gives power to Customs officers to search and raid any premises suspected to house smuggled goods, the headquarters roving team comprising of Nigeria Customs Officers, Nigeria Army, Nigeria Immigration Service, DSS, Nigeria Police and other security agencies involve in this National assignment were drafted to a warehouse at Abayawo Area of Ilorin West Local Government of Kwara State suspected to stock pile with foreign parboiled Rice.

The store was raided and a total of 450 bags of foreign parboiled rice of 50kg each were discovered to be smuggled in to the State, stored in a residential apartment.

The rice was immediately evacuated to Customs warehouse Ilorin, while the culprits are still at large. Every effort is ongoing to arrest them.

Also at earlier hours of Thursday, the roving team stormed Ita-Merin Area of Ilorin West Local Government, where suspected smugglers were in the process of offloading the smuggled rice into a residential quarters.

The area was immediately condon and the rice were evacuated to Customs house Ilorin. After the examination, a total of 224 Bags of rice was discovered.

JOBD said that the breakdown of the seized goods within the period under review included 1,657 Bags of foreign parboiled rice which brought the total number of seized bags of rice from August last year to 14,813 bags of 50Kg each which is equivalent to 22 trailers of rice with Duty Paid Value (DPV) of N451.685.900

Other seized items were  282 kegs of vegetable oil, 898 drums of AGO, 1355 jerry cans of petroleum product, 348 bundles of textile materials, 28 bags of foreign fertilizer, 66 cartons of different brand of beers, 26 units of vehicles and 8 motorcycles.

Meanwhile, the Sector has reiterated its stand that there is no retreat on the fight against smuggling in whatever disguise.

The Coordinator therefore appeals to the general public to embrace legitimate means of livelihood and to avoid smuggling in all its ramifications. “The Sector is combatant ready to halt all the activities of economic saboteurs who want to perpetrate their illicit acts”.

“The Coordinator Joint Border Operations Drill Sector 3 Compt. Mohammed Uba Garba declared that we shall ensure that the maximum revenue collection is made through the appropriate channel of the service as directed by the Comptroller of Customs Service, Col Hammed Ali (rtd).

“We at the sector 3 are committed and determined not to fail in actualizing the goals of the Service that is to stem the activities of smugglers,” the release said.