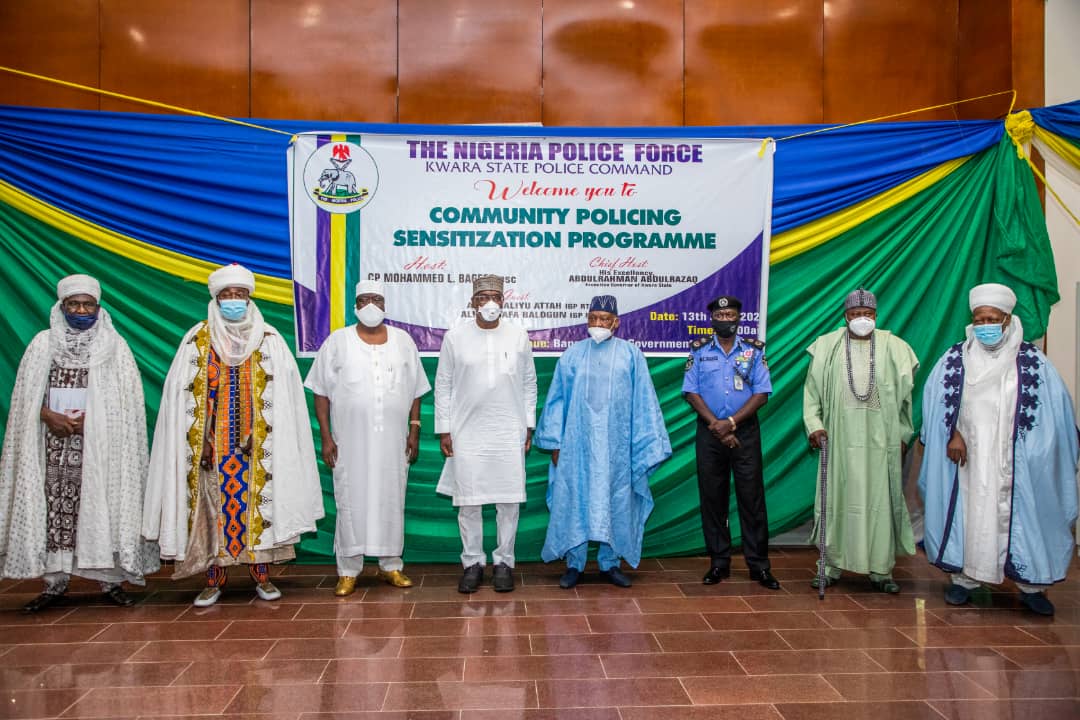 The Kwara State Governor, AbdulRahman AbdulRazaq has reiterated the support of his administration for community policing which he described as long due to strengthen security of lives and priorities.

AbdulRazaq said this on Wednesday in Ilorin, the state capital, at a one-day sensitisation programme on community policing which was organised by the Kwara State Police Command.

According to him, “Community policing is an idea that is long due. It helps to localise policing, brings security architecture closer to the grassroots, and gets a more robust buy-in of the people. It relies almost entirely on local intelligence and constant interactions with community folks to succeed. However, it is important to state that the success of community policing depends on all of us seeing it as our baby that must be nurtured to success,” he said.

“I therefore urge every stakeholder to support the initiative. As an administration, we are wholeheartedly committed to community policing and will continue to mobilise public support for it.”

AbdulRazaq stressed a need for traditional rulers to be accorded constitutional roles as they are the closest to the grassroots and are better legally engaged with certain things related to the masses.

“I have always said that the traditional rulers are the fourth tier of government, their duties encompass all we do in our society,” AbdulRazaq said on Wednesday in Ilorin, the state capital, at the one-day sensitisation programme on community policing which was organised by the Kwara State Police Command.

“We have always been grateful to them because I receive calls daily from them on security issues, not just giving information but also curbing civil disturbances like we recently had in Ilesha Baruba. In that community, there was a civil disturbance earlier and the Emir singlehandedly calmed the situation and ensured that the community is safe.  We deeply appreciate his efforts on what he did.

“In the last meeting of Northern Governors held in Kaduna, there was the idea that the roles of the traditional rulers should be amplified and embedded into the constitution. This means that we should give them constitutional roles in the society. That is an ongoing process, and I am a supporter of this initiative.”

The event was attended by top echelons of the police, serving and retired, such as the retired Inspectors-General of Police Aliu Attah and Tafa Balogun and Commissioner of Police for Kwara State Mohammed Bagega. It was also attended by leading traditional rulers, civil society groups, community leaders, and the media, amongst others.

Attah, in his speech, observed that the existing policing system had been grossly criticized for poor performance because of its inability to meet some expectations, a development he attributed largely to inadequate manpower and funding.

He said when community policing fully comes to play, it will generate employment, reduce youth restiveness, and minimise crimes.

” When a community policing system is introduced, most communities who have not felt the presence of government in their localities would at least know the government has come to them as they will have representation who will be concerned about their safety,” he said.

Balogun, another former IGP, said the initiative climaxed his eight points agenda while in office, apart from the famous operation fire for fire.

He said he, alongside his colleagues are vehemently canvassing support to resuscitate community policing, on account of its potential benefits to reduce crime rate in the country.

Bagega described the programme as a watershed and a radical renewed approach in the implementation of community policing strategy as espoused by the Inspector General of Police Mohammed Adamu.

He added that criminal activities in the nation now require pragmatic approach and support of all and sundry to curtail.

COVID 19: NAWOJ calls for National Day of fast and prayers 0