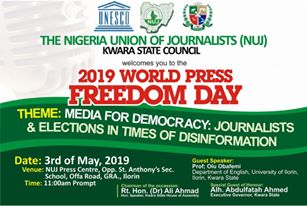 The Kwara State Council of the Nigeria Union of Journalists (NUJ) has concluded arrangements to commemorate the 2019 World Press Freedom Day.

The theme of this year’s event is; “Media for democracy: Journalism and elections in times of disinformation”.

The United Nations Education, Scientific and Cultural Organization (UNESCO) had set aside every 3rd of May as the World Press Freedom Day to raise awareness of the importance of freedom of the press and remind governments of their duties to respect and uphold the right to freedom of expression enshrined in the Constitution of the Federal Republic of Nigeria.

This year’s edition of the event will hold 10 am on Friday at the NUJ Press Centre, Opposite St. Anthony’s Secondary School, Offa Road, G.R.A, Ilorin.

A veteran journalist, Prof. Olu Obafemi of the Department of English, University of Ilorin will be the speaker at the occasion, while the Speaker of the Kwara State House of Assembly, Dr Ali Ahmad is the Chairman.

The State Working Committee of the NUJ urged all members to attend the event which will also feature the recognition of individuals and organisations who made outstanding contributions to the defence and promotion of press freedom in the state.

The occasion will also provide a platform to discuss current challenges faced by media in the just concluded general elections along with media potential in supporting peace and reconciliation process.

The SWC commended journalists in the state for being good ambassadors of the Union at all times particularly, before, during and after the just concluded general election in the state.

It appreciated the state Governor, Alhaji Abdulfatah Ahmed for providing an enabling environment for journalists to practice in the state.

KWARA NUJ FINANCIAL REPORT FOR THE MONTH OF JANUARY 2020 0