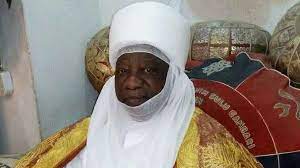 The Speaker, Kwara State House of Assembly, Rt. Hon. Yakubu Danladi-Salihu has extolled the virtues of the Emir of Ilorin and Chairman, Kwara State Traditional Council of Chiefs and Obas, Dr Ibrahim Sulu-Gambari as the first-class Emir turns Eighty-One.

Rt. Hon. Danladi-Salihu in his congratulatory message issued by his Chief Press Secretary, Sheu Abdulkadir Yusuf described Dr Sulu-Gambari as an accomplisher and a fine ruler whose contributions to the peaceful, harmonious coexistence and development of Ilorin and Kwara would always remain a reference point.

He also praised Dr Sulu-Gambari’s sterling leadership qualities and unmatched humane disposition which he noted, had earned him wider recognition and acceptance among the crème de la crème of monarchs in Nigeria.

“It is with great joy that I join the long list of well-wishers of our Royal Father, Mai Martaba Sarkin Musulumi, Dr Ibrahim Sulu-Gambari, the Chairman of the Kwara State Traditional Council of Chiefs and Obas on the occasion of his 81st birthday anniversary.

“It is also gratifying to note that, Dr Sulu-Gambari had been consolidating the works of his forefathers since assumption of office as the 11th Emir of Ilorin many years ago with the use of his wealth of experience and God-given wisdom to protect and promote the ethos of Ilorin Emirate as a foremost city reputable with Islamic values and ideals.

“The Legal luminary has made immense contributions to unity and development of Ilorin and Kwara as a whole and we are proud of his achievements. On behalf of the 9th Assembly, I congratulate our highly respected Royal Father on this historic birthday anniversary”, the statement said.

The Rt. Hon. Speaker also prayed Allah to grant Dr Ibrahim Sulu-Gambari a successful and long reign with sound health and wisdom to continue to rule his people.

Born on the 22nd day of April in 1940, Dr Ibrahim Sulu-Gambari, an astute Jurist,  ascended to the stool of his forefathers on the 11th day of November 1995.