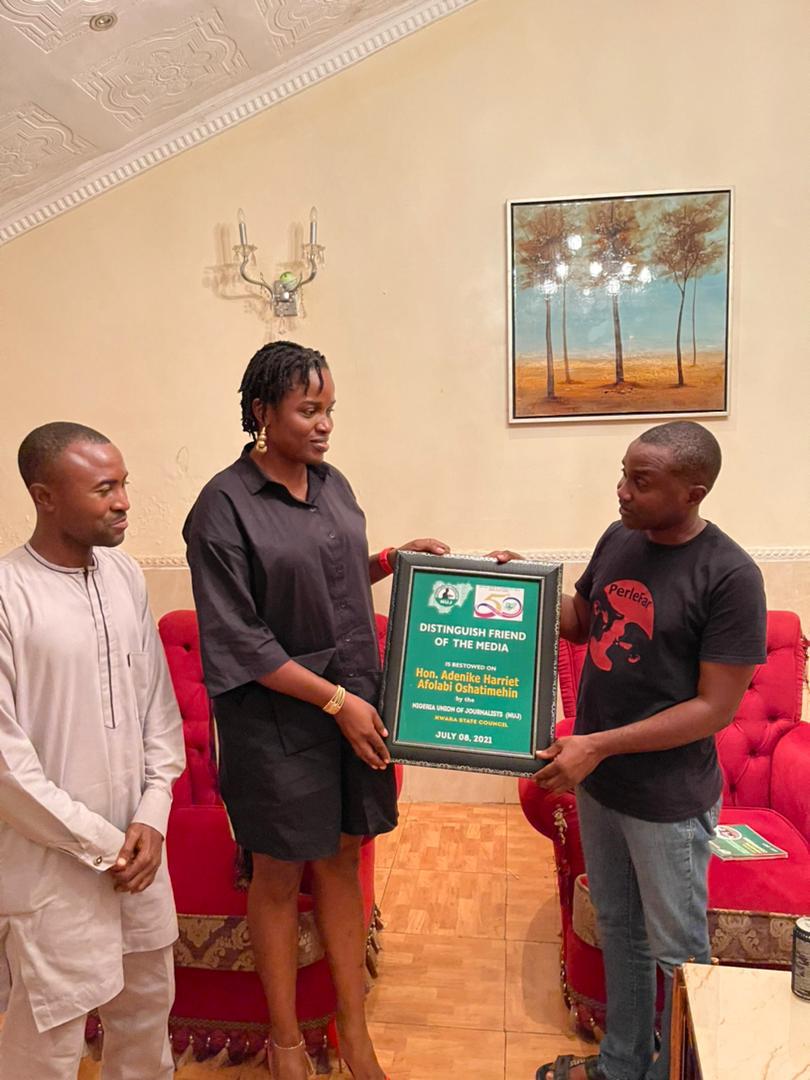 The Immediate Past Commissioner for Communications in Kwara State, Hon. Harriet Adenike Afolabi-Oshatimehin has declared that impacts of government can only be felt by the masses with the full support of the media and journalists.

Osatimehin who described the media as a critical segment of the society, that set agenda on how the citizenry would view or assessing political leaders and their administrations, emphasized on the importance of the media in assisting Gov. Abdulrahman Abdulrazaq achieving his laudable plans for the State.

Oshatimehin made this disclosure while playing host to the team of Nigeria Union of Journalists (NUJ), Compendium and 50th Anniversary Committee of the Kwara Council, led by its Secretary, Deacon Omotayo Ayanda.

She stressed that the support of the media is a very important tool which will assist the Kwara State government to achieve its lofty aims for the State.

“Gov. Abdulrahman Abdulrazaq is passionate about turning the Kwara narratives, it is glaring with what he’s been able to achieve since his swearing-in over 2 years ago.

“Knowing the importance of the media in information dissemination, the Governor needs the support and partnership of the media towards bridging the information gap between the government and the citizenry.

“The government no doubt, has thus far enjoined robust relationship with the media practitioners in Kwara State. Like Oliver twist, I’ll, however, ask for more collaborative and symbiotic efforts, towards ensuring Kwara becomes a better State for us all.

“I plead with you to continue to support our performing governor, Abdulrahman Abdulrazaq, give his laudable projects more publicity. Everybody is commending him over massive roads construction, in the health sector, face-lift and rehabilitation schools’ structures.

“On that note, I beseech the esteemed members of the pen fraternity to please prioritise developmental, conciliatory and peace journalism, over sensationalism amplifying our divides” she added.

She, however, congratulated members of the NUJ in the State over the successful conduct of recent election of the Union and called for a robust working relationship and harmonious partnership between NUJ, State government and the ruling APC for a better service delivery to the public.

Speaking earlier, Deacon Ayanda appreciated the former Commissioner for the robust relationship she created with the media and management of State owned media houses while she held sway.

He, on behalf of the Union presented her with the award of Distinguished Friend of the Media.

It would be recalled that Afolabi-Oshatimehin was one of the shortlisted honorees for the NUJ Compendium unveiling and 50th Anniversary ceremony held at the Kwara Hotels on July 8th, 2021, which she was unable to physically present.