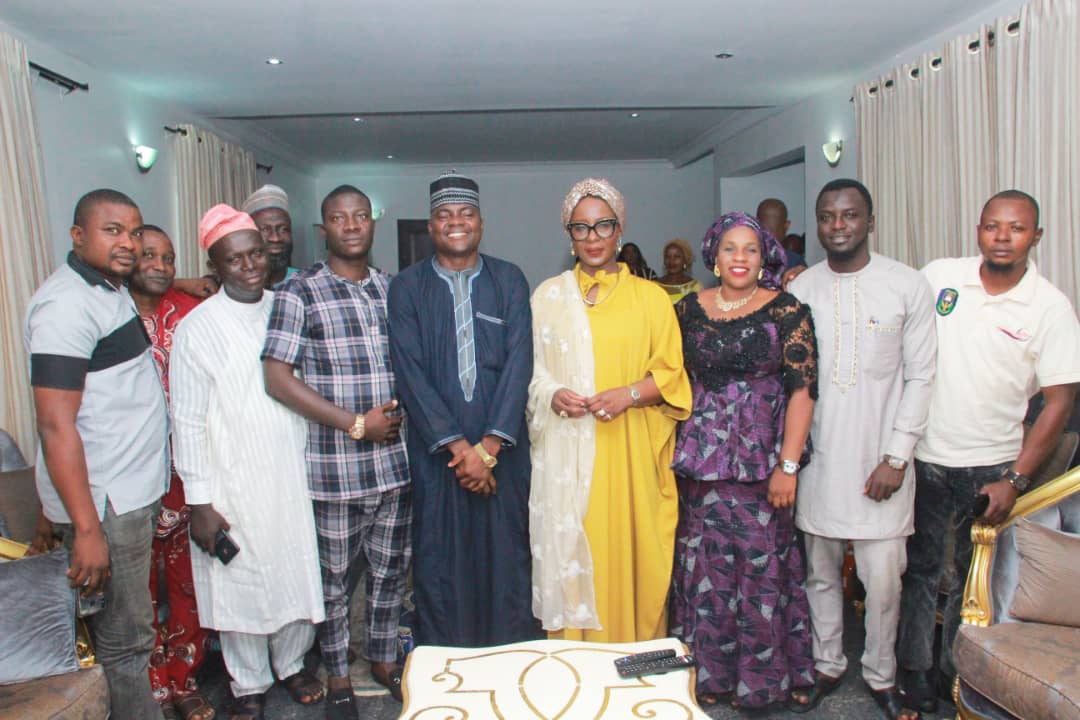 Wives of governors do rarely makes news in newspapers; in this piece, however, UMAR BAYO ABDULWAHAB peeps into the world of the wife of Kwara state governor as she engaged members of the fourth estate of the realm

‘‘Make my father proud’’. That was the plea from wife of the Kwara state governor, Mrs Olufolake AbdulRasaq, to journalists when she received in audience, the state working committee of the Nigeria Union of Journalists, (NUJ) Kwara state council recently.

Looking at Mrs AbdulRasaq from a distance, it is difficult to interpret her mood per time as one can hardly judge her level of human relations especially when meeting her for the first time. A closer interaction, however, would change that narrative about her.

At first sight, seeing her, one has the impression that she is an introvert who decides her audience and ultimately selects her words in relation to the individuals she chooses to relate with.

That is, however, not the case.
Having served in the diplomatic mission, one is however not surprised about her friendly disposition towards visitors.

Looking cool, calm and full of life, Mrs AbdulRasaq is indeed a media delight not because of her eloquence but her beauty.

She is one of those Nigerians who recognise and appreciate journalism profession and the roles of practitioners in Nigeria.

Growing up
To the excitement of the visiting journalists and those who know little or nothing about her background, Mrs AbdulRasaq stimulated her audience when she revealed that her late father was a journalist.

“I grew up in the midst of journalists. My late father was a member of the Nigeria Union of Journalists (NUJ); he was a foremost journalist in Nigeria during his time. I am talking about Mr Hezekiah Olusola David. He was in charge of External publicity for Nigeria at a time and headed the film unit at the Ministry of Information. Later, he headed the National Orientation Agency (NOA); was always celebrated in Vanguard, Daily Times and other newspapers.

“As a foremost journalist, his opinions were always sourced for and he was always quoted in so many papers. His Excellency and my father were always together. He always sought his counsel in so many things. We are missing him very much. In that regard, you are my people, because I grew up with journalists in the house.

“When he was in charge of the external publicity, journalists from British Broadcasting Corporation (BBC), Voice of America (VOA) were always in the house to get the government’s perspective and statements on topical issues and later on also Nigeria journalists. So, my house was always full of journalists as I grew up.

“I have always enjoyed the support of journalists. I read newspapers avidly as a child because they were always in huge numbers. My dad was always supplied from all the news outlets. So, in that regard, I consider you all as my friends and family members,” she said.

Child labour
Reacting to a media reports about a 48-year old woman who allegedly inflicted bodily injuries on her two house helps with a hot knife for not flushing toilets properly, the governor’s wife, took time to explain the role played by her office in ensuring that the victims got adequate care.

She assured that her office would always rise in defence of the down-trodden in the society.

“Yes indeed, the information about the lady you mentioned that did this horrible and heinous act of putting hot iron on her house-help members was sent to me via WhatsApp and I sent it to the Permanent Secretary Ministry of Women Affairs. So, he quickly got up to find out what was happening and I was happy the lady was remanded.

‘‘The case is in court and the children were handed over to the Ministry of Women Affairs as custodians of the children momentarily. We were able to swing into action quickly because people sent us all the information,” she recounted.

Appreciating the watch dog role members of the press have been playing in bringing government accountable to the people in the state including her office, the Kwara first lady took opportunity of the visit to unveil her plan for women and children in the state.

She said, “I thank you for the interest and the fact that you have been following all these topical issues that we have been trying to work on.

“We are looking at the issue of a four-year-old girl that was allegedly raped by a 60-year-old man. We did the similar sort of thing with that and anything that comes up, we will definitely take care of it. We are coming up in November an International Day of Saying No to Sexual Abuse, gender-based violence. This is what we are working towards”.

“I thank you for the comment raised on the drug abuse and rehabilitation and the work we have been doing so far. I look forward to continuing it. We need to work hard in making sure that there is awareness and sensitivity to the plight that awaits anyone that really engages in this without thinking of their future”.

“It is important that youths are gainfully engaged so that they know better than to ruin their lives by taking drugs. So in that regard, I want to charge you all to make sure that information is out there for young people; children, youth. The more information about things going on, the better for the population,” she said.

Responsible journalism
While canvassing for youth engagement, the governor’s wife also tasked journalists to make useful information available to the public on how to access and explore opportunities which the present administration is offering to make life better for the masses.

“So, I charge the NUJ as a body to continue to make sure that journalists are more responsible to their calling and to their jobs. You perform a very important role in nation building. I want to charge you not to rest on your oars to make sure that you continue to discharge your responsibilities to the best of your ability. Make us proud and make my father proud too”, she said.

Abdulrazaq: Creating opportunities for the youth 0

SECRETARIAT REPORT FOR THE MONTHS OF OCTOBER, 2018 0