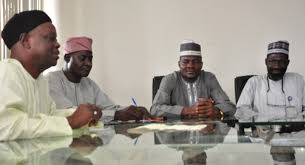 Prof. Sulyman Abdulkareem, the Vice Chancellor, University of Ilorin (Unilorin), has called on the Nigeria Union of Journalists (NUJ) to train Mass Communication students on the practical aspect of journalism.

Abdulkareem made this call when the State Working Committee of the NUJ, Kwara council, led by the Chairman, Mallam Umar Abdulwahab, visited him on Friday in Ilorin.

The VC noted that practical training would place the graduates in a better position to compete favourably with their professional colleagues anywhere in the labour market.

He added that the Mass Communication students needed to gain more from people on the field, adding that practical training could equip the students with a well rounded education.

Abdulkareem, who emphasized the importance of information in a society, regretted that social media platforms were being used to propagate falsehood.

The Unilorin VC noted that it would be difficult to checkmate social media reports because the platforms had made everybody a journalist, even when many of them lacked the requisite professional training.

He lauded the state council of NUJ for choosing him as a patron and assured that the institution under his vice-chancellorship would do its best to partner with the union.

Abdulwahab said one of the union’s priorities was the safety of the members against impunity, intimidation and harassment.