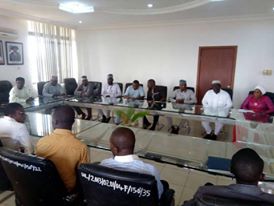 Vice-chancellor of the University of Ilorin, Professor Sulyman Age Abdulkareem, has felicitated with the new chairman of the Kwara State Council of the Nigeria Union of Journalists (NUJ), Umar Abdulwahab and members of the State Working Committee (SWC) of the Union.

Abdulkareem described the emergence of the new council chairman as” well-deserved” given his antecedents of meritorious service to the union and journalism profession.

The VC said he was confident that the election of the new excos would bring about mutually beneficial relationship between media practitioners in the state and the University of Ilorin.

The letter reads:”The Vice-Chancellor of the University of Ilorin, Prof Sulyman Age Abdulkareem, hereby felicitates with you and other members of the State Working Committee (SWC) and other members the Kwara State Council of the Nigeria Union of Journalists (NUJ) on your recent elections.

“I urge you to sustain and build on the sterling achievements of your predecessors in office, achievements that have marked the Kwara State Council of NUJ out as a unique and forward-looking group of highly-rated professionals.

“Please be assured of the University’s continuous support for Journalists in the state towards ensuring a more conducive environment for the practice of their profession.

In a related development, the National Association of League of Veteran Journalists NALVEJ , Kwara state Chapter and Ridwanullahi Islamic Society of Nigeria have also joined others in congratulating the new NUJ Chairman and members of the recently inaugurated State Working Committee of the Union.

State Chairman of NALVEJ, Reverend Samuel Akindele who led other members of the league on a courtesy call on the chairman at the NUJ Press centre, urged him to always consult widely before taking decisions in order to achieve positive results.

Similarly, RISEN in its letter signed by Secretary, Board of Trustees, (BOT), Mallam Abdulganiyu Kola on behalf of the BOT Chairman, Justice S.O Muhammed, grand patron Alhaji Yusuf Muhammad Nuhu and founder, Alhaji Abdulrahman Odore, prayed for a successful tenure of the new SWC of the union.